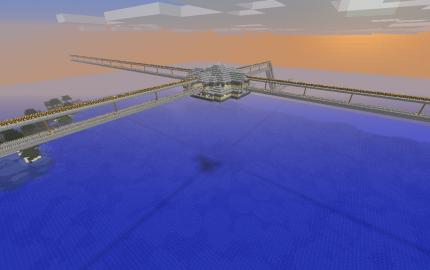 This creation has been tested by

This schematic is a "pack" of components, intended to be opened in an editor (like M.C. Edit) and placed onto a test map where it can be "unpacked" into its individual components to be used to assemble a rail transport system to augment what ever you already have on your main map or server.
There are two versions of this pack, a Drive on the Left, Pass on the Right version, (this version) for those adhering to the rule of the road used in places like Britain, Thailand, Japan or New Zealand.
A second version, (not easily cerateable from this version by simply "mirroring" this version in an editor like M.C. Edit, because of the North-West rule causing the redstone mechanism to malfunction) for Drive on the Right, Pass on the Left realms like the United States, Canada or South Korea.
The pack consists of four versions of the track-point intersection, two aerial and two subterranean versions as the main components and a host of dual track "train-set" parts such as ramps, corners and straight length sections both subterranean and aerial. The aerial track sections are a minimalistic design aimed at minimal obstruction of the view below, roof to keep off the rain, mobs and snow and light to keep tracks clear.
The images depict only the aerial track-point intersection Drive on the Left (British) version.