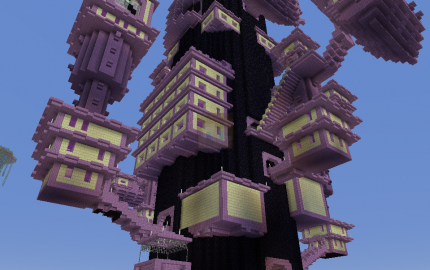 It is said that somewhere deep in the End there is a great king who rules over a mighty fortress city. Travelers' tales hold that great wealth can be found there, as well as treasures from many lands and planes, and that all are welcome provided they do not trouble the city's inhabitants. Those who would cause trouble, however, are warned that the Ender King commands a great army of undead warriors - those who trouble his city usually end up serving in it for eternity...

This build incorporates Mr. Crayfish's (from YouTube fame) mercantile system. Some elements are taken directly from randomly generated ender villages. Dungeon levels are inspired by Ermin Craft's magnificent "Dungeons of Denalia". Thanks to splinteredvoyagers for the original Ender Castle build.

Fully furnished, but most treasure chests have been left empty so you can customize their contents.