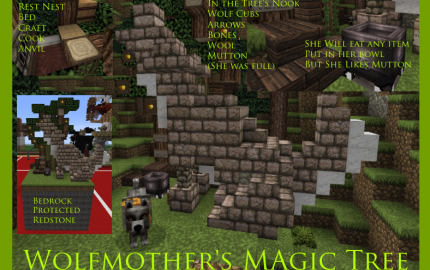 The Previous babble on this thing...I've been walking around my survival world not mining not cutting a tree just shazaming stuff into being with mced. So walking around the forest spotted some wolves and so at first just made a reasonably sized wolf statue. One thing led to another thanks to a vid I watched by cubfan135 that tipped me cauldrons connect to funnels. Ok lol now she ate my stuff..but what if..hours and hours later converting my exchanger thingy to work vertically I built this nice little scene. Give her mutton she will make her treasures appear in the tree.(treasures to a wolf are wool, bones, arrows, (How to get to the redstone notes: turn away from the wolf. There is a root from the tree pointing North, 1 block past that dig down till you reach the wool and door. The redstone interior is prepacked with wool for easy clean-up but still carefull of the circuits)


New babble about this thing...I cleaned up the wool after I plugged this into a world and forgot to delete it first. The wool that had been causeing redstone burnout has been replaced with slabs so you can have air copy off and plug it in properly without shorts from dirt/stone. Also added a command block widget that will instant kill any Creepers that come within 24 blocks of the tree. Cause I hates me sum creepers! I also removed Mutton from the reward options. Now she will give out Enchanted Golden Apples instead, made sense next to the golden apple she she doesn't want you picking. (V.3 might have anti-player griefing)