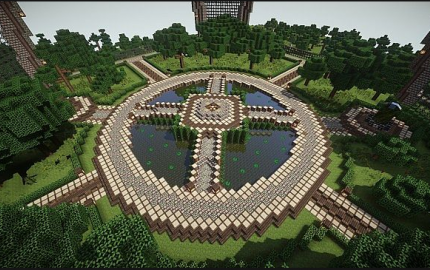 This is the spawn I built for my server, GLADIUS (vanillanation.mcpro.co). As we are a semi-vanilla server it is quite a simple spawn layout, however it combines some futuristic and nature-inspired build features which make it unique.

New players begin in a small underground spawn room which lists commands and rules for the server. Players are then teleported via. command blocks to the center island at spawn. From here the players can run towards the glass, drop off spawn, and begin their adventure.

Two sets of stairs in spawn lead down to a PVP arena. To enter the PVP arena walk down a set of stairs on either side of the room - these lead to a pressure plate activated steel door. Once in the arena, players can use /spawn to return to spawn.

Here there is also space for extra rooms. Currently we have a vote shop and a trading room, but if you choose to use this build on your own server I'm sure you can think of some other cool things to add.

Surrounding the central spawn island are four circular "pods". Two of these pods are stairways down to the arena. On GLADIUS, one of the remaining two pods is used for a jail (see the image above) while the final pod is currently a list of top voters/players. These areas could also be used for a small shop, rules signs, donor information, warps, etc.

This spawn contains five (or so) hidden rooms. Some of these are inaccessible without using command blocks, but if you turn on an x-ray texture pack you should be able to see them. There is a secret stair to the top of spawn, a treehouse, a magic button, and more!