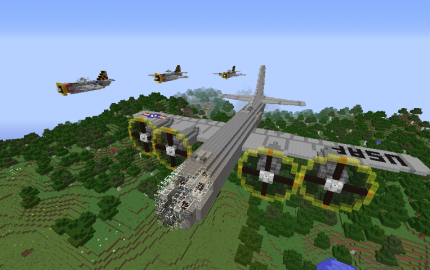 A fully functional and realistically scaled replica of the B-29 Superfortress from America.

The B-29 was developed in 1942 as a high-altitude strategic bomber. It was one of the largest and heaviest aircraft to be built, weighing more than 33 tonnes empty with a payload of up to 9 tonnes of ordinance. Its features were very advanced for its time, such as the pressurized cabin and remote controlled guns.

The most famous use of the B-29 was the Atomic Bombings of Japan.


This version is a remake of the earlier submitted B-29 with a more realistic size, and functional automatic weaponry.

It is to be operated by 9 players in the following layout:


Place in mid-air or on airfields for best effect.