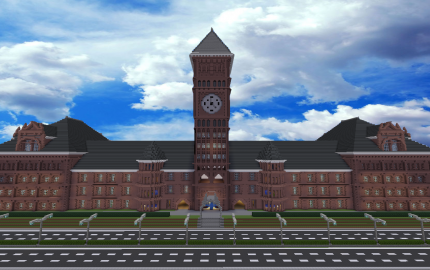 This creation has been tested by

Big oldschool building with classrooms and some furniture.
The clock tower in the middle has a big bell.
I used a picture of the old duluth central high school to make this building.
Its close to the duluth high school but some things i needed to change so its not called the duluth high in the title.
some facts:The Historic Central High School in the U.S. city of Duluth, Minnesota was built in 1892 of locally-mined sandstone at a cost of $460,000. It features a 230 foot clock tower with chimes patterned after Big Ben in London; the clock faces are each 10½ feet in diameter, overlooking the Duluth harbor. Architectural details such as gargoyles are the work of George Tharna. In 1972 the school board ceased using the building for classroom instruction, possibly because the hungry boilers would burn up to 8 tons of coal per winter day. The Central Preservation Committee and other interested citizens saved the building and created an 1890s classroom museum within the structure. Duluth Central High School moved to its new location and the historic structure was renovated for administration use. Subsequently, the alternative school, Unity High School began occupying some space in the old building. Their mission is to develop alternative teaching and learning methods, and enrollment is by referral only.

Others creations from jar9