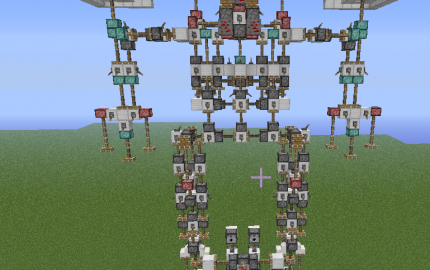 A robot made of pistons and iron. As far as I know, the schematic file works, but be careful when copying it as although it's vaguely human shaped, the file itself is a large cuboid. Also, there may be remnants of a smaller robot near the foot of the larger one. It has four auto-canons on it's shoulders, activated by pulling a lever. You need to find it, but it should be obvious. It works by removing a block that's stopping a redstone loop from firing about 10 dispensers filled with fire charges.