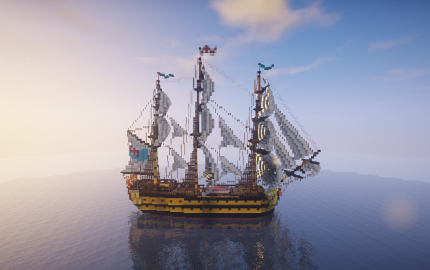 HMS Vanguard - 74-gun ship of the line of the third rank. The sixth ship in the Royal Navy, named the Vanguard. The tenth Arrogant-class ship of the line. Laid down on October 16, 1782. Launched on March 6, 1787 at the Royal Shipyard in Deptford. Took part in many naval battles during the French Revolutionary and Napoleonic Wars, including the Battle of the Nile.

Unlike the original, my building has 70 guns, because there was not enough space for the other four guns. Also, the stern of my ship has a slightly different appearance. Otherwise, this is a real HMS Vanguard.

I really did my best on this building. I hope you will enjoy it and you will like it.