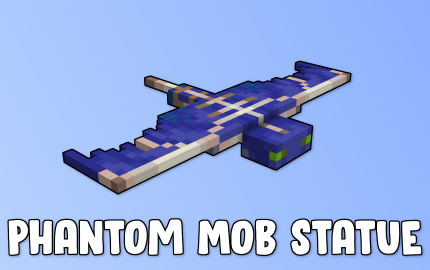 Statue of the "beloved" phantom mob (1 pixel : 1 block). I included two variants of the statue: one flying horizontally and one flying vertically.
I used some string to keep the blue concrete powder in place (especially for the horizontal version). If you build the statue very close to the ground those might be noticeable.

Note: I used lime shulker boxes for the pupils because I like the swirl. But the shulker boxes will not render when you are some blocks away from the statue. If that is annoying, you can replace them with green concrete or emerald blocks.