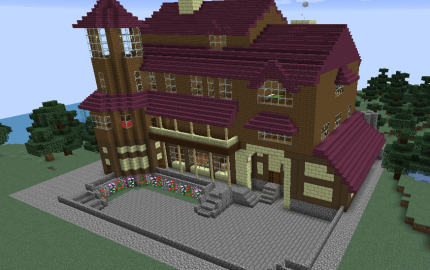 Spent a few hours building this map here and decorated it as my party has it decorated for the campaign. Minor modifications were made to allow for either ease of movement around the building or to make rooms fit within the designated space as walls are part of 5 foot squares on the map creating essentially half spaces. Exterior design based on art depictions of how the manor was described in the book.

When you bring it into your map, you will be on the South West corner, so be aware of that so as to not destroy anything by accident. I also highly suggest you have fire tick turned off due to fireplaces. I tried to switch it all to campfires to prevent spread but I have not tested to see if it spreads without so take caution in case I missed some fire.

!!UPDATE: A number of people have contacted me saying it won't load or the roof is missing when loaded in. The build must be placed in at least the 1.16 update or it will not work properly as the roof is all the new block/stair type. There is also several structural components from other recent updates including the newer end stone block types. I have tested it out on my own server and another several times and have gotten it to load up properly so I'm not sure how to help with any mishaps other than to tell you to make sure you are updated to the latest version of minecraft.