The Church of Saint Nicholas Lesser Town of Prague 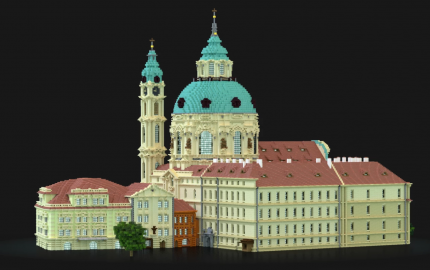 The most famous Baroque church in Prague is also one of the most valuable Baroque buildings north of the Alps. The dome has an impressive diameter of 20 m, and the interior height to the top of the lantern is over 49 m, making it the highest interior in Prague. It is also an outstanding example of high Baroque decoration. Concerts are held in the church year-round on the historic organ dating to the 18th century.

The Church of St Nicholas, the most famous Baroque church in Prague, stands along with the former Jesuit college in the centre of the Lesser Town Square. A Gothic parish church consecrated by Prague Bishop Tobiáš in 1283 stood at the site until 1743; nearby was the Romanesque Rotunda of St Wenceslas, which had been built in memory of the miracle that occurred during the transfer of Wenceslas’ body from Stará Boleslav to Prague Castle, as mentioned in medieval legends. Today’s Church of St Nicholas is one of the most valuable Baroque buildings north of the Alps. Construction lasted approximately one hundred years, and three generations of great Baroque architects – father, son and son-in-law – worked on the church: Kryštof Dientzenhofer, Kilián Ignác Dientzenhofer and Anselmo Lurago.


The Jesuit Thomas Schwarz built the small and the main organ, as well as many others in Bohemia. Built in 1745-47, the main organ has over 4,000 pipes up to six metres in length. W. A. Mozart played this organ during his stay in Prague as a guest of the Dušeks.
The Church of St Nicholas is a superb example of High Baroque architecture, a building that astonishes visitors with its size and monumental interior. As the most prominent and distinctive landmark in the Lesser Town, no panoramic view of the city would be complete without its silhouette below Prague Castle.

This is my most realistic project. I consulted the construction with HappyMouseCZ. It will be part of the most epical replica of Prague city in the history of Minecraft.