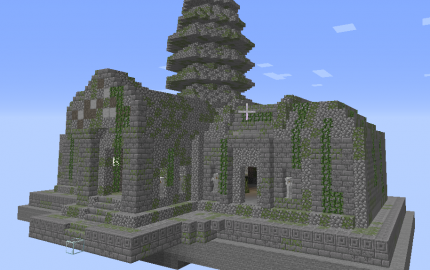 I took the default Jungle Temple and revamped it in the style of the temples found in Cambodia, such as Thommanon. The "secret" chest is still in the temple and is accessed using the same mechanism as the default temple. The entrance to the second level is activated by a lever you will find inside. Creation of the redstone for the door goes to Mumbo Jumbo. I have no redstone skills so I used a build from his channel.

The outside is NOT landscaped so do not dig out the stone. The chests do NOT have loot. I wasn't sure what to put in the chest. I will say the wither skulls point the way to it though. There is also a single spawner somewhere within its depths. The paste point is glass block in front.

Good luck and bring some torches!