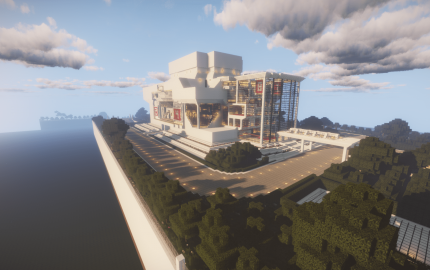 With the new NHL season underway, I figured it would be pretty cool to FINALLY give people a large (but not super obscene), functional, and well detailed hockey arena. I did a search of hockey arenas on here and only 3 came up, with one of them being my old creation. This building may look familiar, and that's because this is a renovation and modernization effort that I completed with my old submission to the genre, the Carl P. Hockey Arena. CBC Gardens is both longer, wider, and more modern than the Carl P. Arena, and features quite a bit more than the old arena ever did.

Feature list:
-PLUG AND PLAY READY FOR YOUR CITY, make the space, drop the schematic in, and enjoy!
-Hundreds of general use seating
- 16 VIP booths perched well above the rink, with prime viewing of the rink itself.
- Custom public entrance complete with a fast pass lane and lookalike metal detectors for the other 3 public lanes
-Completely remodeled rear entrance for team and league executives, which also serves as the player's main entrance, with direct access to both locker rooms, and dual stairwells to the executive office suites.
-Custom built practice rink below the main rink surface, complete with private stands for scouts, family, friends, or VIPs, and booths surrounding the practice rink for extra viewing space.
-9 executive offices and 2 conference rooms, along with a GM office at the top of the new player entrance.
-Access to the top ring and VIP suites from the executive wing of the rear entrance
-Remodeled locker rooms, with exercise areas, a side entrance, and access to the practice rink from the home team locker room.
-Underground access to the practice rink via tunnel which exits from the front and rear. The underground entrance to the practice rink has its own custom entrance.
-Revised front and side facades in addition to the new rear of the building.
-custom landscaping around the property.

This project isn't perfect, there are still symmetry issues around the arena that aren't hard to spot. My goal with this wasn't to fix everything, but rather modernize it, make it look better using the skills I've learned building things for the last 5+ years, and give people a cool looking arena with character that can actually be used.

I will be leaving my old rendition of this arena, Carl P. Hockey Arena, up on my page still if anybody wants to check out my skills from I think 5 years ago, I made it around a year before I posted it here and I was still learning how to make things properly.

I hope you enjoy!
-TheSun

Others creations from TheSun